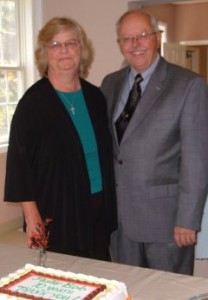 Pastor Bob and his wife Nelta on his 10th anniversary as pastor at Marlboro.

I consider my youth years to have been pretty ordinary as I regularly attended church with my family in a small town called North Loup, Nebraska.  It wasn’t until my pastor, Pastor Duane Davis,  invited me to go with him to Arthur, Nebraska to work with a group there, that I began to think about how maybe even I could serve God.  Several years later, I participated in the Seventh Day Baptist  Summer Christian Service program. When I returned home, I was asked to present a report of my summer activities in front of the church.  It was then that I began to have the  feeling that maybe God was calling me to become a  pastor.  Later as that idea continued to take form, the head of the Missionary Society, Leon Lawton, spoke with me about my interest in becoming a pastor.  It was primarily because of his insistence in the value of seminary that I decided to go to Eastern Baptist Seminary in Philadelphia, after I had completed college at Mankato University in Minnesota. After one year of seminary I began to question my calling and the whole idea of seminary. My wife Nelta and I moved to Plainfield, New Jersey where we lived for three years. During that time God continued to work in me and in 1973 we returned to seminary.  This time it was to North American Baptist Seminary in Sioux Falls, South Dakota.

After seminary I accepted a call and moved to Houston, Texas with my wife, Nelta, and two children.  I helped start the church there as part of a mission project called Reach Out Now.  Even though I had grown up in the church and even gone through seminary, it wasn’t until Houston that I truly started really experiencing God at work in my life and not just knowing about him.  It was then that I started taking time during the week to get away to be with God.  There was a park that I liked to visit to get alone with God, pray and meditate on His Word.  It was a relatively quiet place with little foot traffic during the middle of the day.  Many times I’d find myself sitting silently and just meditating on the Word, praying out loud or even singing praises to God.  (It’s a good thing that there weren’t many people around to hear as everyone knows who has heard me sing!)  None the less, it became a meaningful exercise in my life.

My life as a pastor has allowed me to serve three different churches and each one for over ten years.  Overall my duties have been the same: preach, visit the sick, work with the youth, and reach out to the surrounding community.  At first in Houston, we did a lot of door to door visitation.  When that didn’t prove very fruitful, we spent much time trying to develop ministries that would meet the needs of the surrounding area.  After Houston, I helped start a church in Santa Barbara, California.  We spent a lot of time doing a “Needs Survey” and trying to figure out how we could fit into and become a part of our community.  Now serving here at Marlboro, we also have spent much time on trying  to become a community church as well as a more welcoming church. Many of the activities we have begun involve the youth.  We first started with Vacation Bible School and even have held it over Christmas Break the past several years.  It seems to me that it is important to not only teach children about God’s love for them, but also help them to see how they fit in the church, much like Pastor Duane showed me.  Several years ago, I started our church’s Youth Fellowship.  This program has been essential in helping the youth begin taking on responsibility and creating ties with each other and within the church.  Recently, the YF raised funds through different events they organized and performed, in order to go on a retreat up to Ole Bull Campground in PA.

In the last five years, I have enjoyed working with the youth and have especially enjoyed counseling with those newer to the church.  It has been a time to talk about their expectations, questions, and concerns.  Many times questions arise about how to deal with things from their past or challenges they are facing now.  Many share the challenge to now live a life for God apart from their old ways and I believe this is a challenge all Christians deal with in varying degrees.  Counseling them has brought about a close connection that makes me feel a part of their lives as I hope they feel a part of us.

I say it to my congregation a lot, but it is true, so I’ll say it again: I am blessed.  I am so blessed to have been called to serve here at Marlboro and I look forward to what God has next for us.

Join us for church each week on Sabbath (Saturday) mornings at 10:00am.