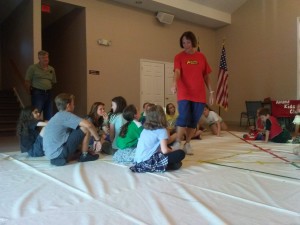 We had a great time last week at the start of the AWANA program for the 2019-2020 year! There were lots of kids joining us from Vacation Bible School and Ms. Sharon had a great musical connection with one of the favorites from this past summer’s VBS. It was a great chorus of voices singing “God of Wonders” in praise to God. Kids had a great night with Ms. Bethany during Recreation playing with bubbles on Bubble Night! The kids had to get as many bubbles on the opposing team’s side before that team could pop them! Pastor Bob and his crew outgrew the classroom and moved to the basement of the church. The T and T Class (3rd – 6th Graders) thought that was great and even wanted to use the bean bag chairs and other fun stuff down in the Youth Center. They may not have gotten to play, but they did enjoy the couch and recliners during their lesson. The Cubbies (Preschool 3s – 5s) got to meet their puppet friend, Cubbie Bear, and played several fun games about who God loves. Later, they worked hard with Ms. Yvonne on their first memory verse for the year from 1 John 4:10 that says, “God loved us and sent his son.” Ms. Joanne had an awesome crew of Sparkies (K-2nd Graders) who also worked on their first verse of the year. When they come back and show they have John 3:16 memorized, it will be the first of many that will help them earn their badges and jewels on their red Sparky vests!

Join us for church each week on Sabbath (Saturday) mornings at 10:00am.